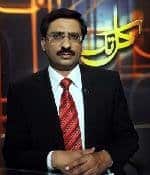 Javed Chaudhry was born in a village in the district of Gujrat, Pakistan. He got his degree of journalism from The Islamia University of Bahawalpur. He has two sons and currently resides in Shahzad Town, Islamabad.
Javed Chaudhry is one of the leading columnists of Pakistan. He writes regular columns for the Urdu newspaper Daily Express twice or thrice a week, covering topics ranging from social issues to politics.

Career
He started his career in 1991. He worked at Daily Ummat and Daily Khabrain before joining Daily Jang in 1997. During his association with Daily Jang (1997-2006) he was the most read Urdu columnist of Pakistan. He joined Daily Express in 2006; an action which was criticized by many of his former colleagues at Daily Jang.

All Pakistan Newspapers Society (APNS) awarded him the Best Columnist of Pakistan award (1997-98) for “Madeenay Ka Shaheed” (English: Martyr of Medina); a column that he wrote about the assassination of Hakim Mohammed Said.

In January 2008, Javed Chaudhry joined Express News (Pakistan) as an anchorperson of a Political Talk show “Kal Tak”, in which he presents analysis on current affairs of Pakistan and invites guests from various think tanks and political parties to comment. Viewership of his program is increasing day by day.

He enjoys great popularity among the masses with his style of dramatic narrative theme that captures the reader’s attention immediately. Tells the often stimulating and inspiring success stories of people from different walks of life. However, according to some critics, the validity of the material that it contains articles of questionable sometimes, over-emphasis on the point of view gets the best of it. Moreover, he accused black people of different mailing to publish his book” scratch”. Developed serious differences with Khusnood Ali Khan and Zia Shahid due to black mailing incidents. He claimed former Federal Minister for Science and Technology Jawad Chaudhry extracted millions of rupees by black mailing him. Also developed differences with Talat Hussain AAJ TV anchor on the issue of naming the program as the zero point. Patients with diabetes, and very ambitious, and he published a collection of his articles in the form of four books:
Zero Point
Zero Point II
Zero Point III
Zero Point IV
More than 70 editions of his books have been printed and his books are among bestsellers.