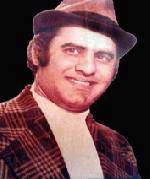 Munawar Zarif was born February 2, 1940 at Gujranwala, Punjab Province Pakistan. He was a well-known Pakistani comedian and film actor. He was a multitalented actor and comedian best acknowledged for his work in the Pakistani cinema of the seventies 70’s. Zarif is generally considered as one of the handpicked comedians subcontinent ever produced and emerged in over 300 films. He began his film career from a Punjabi film “Dandian” in 1961 and got burst through from film “Hath Jori” in 1964. After a wonderful film career as a leading comedian, he turned into film hero – first as side-hero in film “Pardey mein rehney doe” and finally in the title roles and hero in the same year in film “Banarsi Thugg” (1973) and “Jeera Blade” (1973). Munawar Zarif has come out in over 300 films in only 16 years from the era of 1961-1976. He was also eminent for his out of script dialogue delivery. On 29 April 1976 he died of a liver failure in Lahore. His Brothe Majeed zareef was a great singer and actor in pakistan film industry His Death on 29 November 2012 he died of a Liver Failuer in Lahore. in Shalimar Hospital