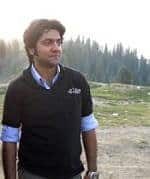 The greatest inspiration for him which motivated him for this job is according to him the ability to overcome fear and the exploration of entirely new genres of life. Now after being a part of two paranormal shows, he finds his level of information increased with different lights of the universe. He takes it as an achievement and is still striving for more as he has realized that there are many other phenomena’s in life those are yet to be discovered or explored by a human eye.