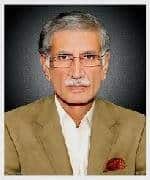 Pervaiz Khattak was born in 1st January 1950 in village of manki shareef, Pervez Khattak received his early education at the Aitchion Colllege Lahore. After that he is going to Senior Cambridge from Aitchion. He had also worked as political worker of Pakistan Peoples Party.

Chairman PTI, Imran Khan nominated May 13 2013,  Pervez Khattak as the  Chief Minister of KPK, the top post in the province where Imran Khan’s Pakistan Tehreek-e-Insaf.

Pervez Khattak is father of 3 sons and 2 daughters. His two sons Ibrahim Khan Khattak and Ismail Khan Khattak are receiving education in UK. And One is  Ishaq Khattak, after complete education,He managed it company that his grandfather had established before the creation of Pakistan.

Uncategorized 0 139 views
Badar Munir was a Pakistani film actor once known as Badar Abdul. Originally from