Chief of The Army Staff 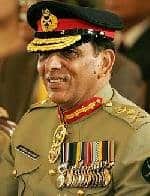 General Ashfaq Parvez Kayani was born in April 1952. He is a four-star general who currently holds the position of Chief of Army Staff in Pakistan. General Kayani also served as Director General Inter-Services Intelligence (ISI).Prime Minister Yousuf Raza Gilani extended his term in 2010 and he remains the only Chief of Army Staff whose term was extended by any democratic government in the history of Pakistan.
Career History

Kayani was promoted as Lieutenant General in September 2003, and was given command of the X Corps in Rawalpindi. He pointed to strengthen confidence in Musharraf’s chief Kayani, because the commander of the army can not build a military coup without the aid of the commander of the Tenth Legion. Kayani led the corps until October 2004, when he was transferred to the ISI and its president.

During the course of my being in the tenth legion, and he led the successful investigation of the suicide attacks back to back against Musharraf in December 2003. It is believed that Kayani won the trust of Musharraf after the conclusion of the investigation, and an introduction to enhance my being in a sensitive position of President of the ISI. He was awarded Hilal-E-Imtiaz, civilian award, in order to complete his.

Memo Scandal:
In the backdrop of infamous and controversial memo scandal, General Kayani and his comrades did not agree to accept the government’s stance on the issue which instigated a series of disagreements on both sides. Kayani accused the political leadership of diverting the attention from memo scandal by spreading rumours about a possible coup and showed resilience to solve the memo mystery.
Inter-Services Intelligence

In October 2004, Ashfaq Kayani was made the director general of Inter-Services Intelligence , in place of General Ehsan ul Haq, who was promoted as the Chairman Joint Chiefs of Staff Committee. Kayani led the ISI during a bleak period, with insurgencies in North-West Pakistan and Balochistan, Abdul Qadeer Khan’s nuclear proliferation scandal, and waves of suicide attacks throughout Pakistan emanating from the northwestern tribal belt. In his final days at the ISI, he also led the talks with Benazir Bhutto for a possible power sharing deal with Musharraf. In October 2007, after three years, he was replaced at the ISI by Lt Gen Nadeem Taj.

Kayani was also present at the March 2007 meeting that took place between Musharraf and Chief Justice Iftikhar Muhammad Chaudhry, when the former military ruler informed the top judge that he was suspended. Accounts of that meeting narrated that Kayani was the only one among Musharraf’s aides who did not speak a word.
Chief of Army Staff

In October 2007, Kayani was promoted as a full general, and made the Vice Chief of Army Staff. At the time of promotion, Kayani superseded one officer, Lt Gen Khalid Kidwai who was on an extension for a year. He took over as the new army chief of Pakistan Army after Musharraf’s retirement on November 28, 2007. The ceremony was held at the sports stadium near General Headquarters, Rawalpindi. Kayani is the first officer in the history of Pakistan who held the position of DG ISI and then went on to become the Chief of Army Staff (COAS). The last time a Director General of the ISI was to be made army chief in 1999, the Army staged a bloodless coup to reinstate the proposed outgoing Chief of Army Staff, General Pervez Musharraf.
Withdrawal of military from civilian government

In January 2008 General Kayani passed a directive which ordered military officers not to maintain contacts with politicians.It was further made public on 13 February 2008 that General Kayani ordered the withdrawal of military officers from all of Pakistan’s government civil departments. It was an action that reversed the policies of his predecessor, President Musharraf. It was welcomed by President Musharraf’s critics, who have long demanded that the military distance itself from politics. The Pakistani media reported that the army officers would be withdrawn from 23 wide-ranging civil departments, including the National Highway Authority, National Accountability Bureau, Ministry of Education, and Water and Power Development Authority.
2008 general election

During the year of election, Kayani vouched and announced that the army will responsibly play its constitutional role and will stay out of politics. He said that the army will fully support the democratic government and its strategic alliances.
Perceptions of Kayani as COAS

When he became COAS, several top-level U.S. officials visited General Kayani in succession to make up their own minds about him. Most, including the then CIA chief Michael Hayden, National Intelligence Director Mike McConnell and former CENTCOM-commander Admiral William Fallon came away confident that Kayani “knows what he’s doing.”

Kayani’s first move as army chief was to visit the front lines in the Federally Administered Tribal Areas (FATA). Spending the Muslim holiday of Eid not with his family, but rather with his soldiers prompted American military officials to praise him as a “soldier’s soldier.” A U.S. report quoted retired Pakistani military officials as saying that in “an army deeply enmeshed in Pakistani politics, General Kayani had declined to ally himself with any political groups”. As a Brigadier, he briefly served as a military aide to Benazir Bhutto during her first term as prime minister in the late 1980s, but has stayed away from politicians since then.
Recent events
Gen. Kayani and Gen. Stanley A. McChrystal (Commander of NATO ISAF and U.S. Forces Afghanistan) during 29th Tripartite Commission meeting.

About the Afghan war, Kayani is reported to have said, “the Pakistani people believe that the real aim of U.S. strategy is to denuclearize Pakistan.”

In January 2011, and after, there was criticism of General Kayani’s handling of the Raymond Davis saga. Davis, a CIA contractor, was hastily tried and acquitted of murder charges in exchange for blood money paid to relatives of the victims, after which he was sent out of Pakistan within a matter of hours. Knowing the dynamics of the Pakistani state and the nature of this particular case, it was impossible for Davis to be released and deported from Pakistan without the knowledge and cooperation of Pakistan’s Army and the Inter-Services Intelligence (ISI).

Day after the release of Davis, and killed more than 40 people in an air raid Datta Khel in North Waziristan in the tribal areas, in an air strike by pilotless drones in the United States. This seemed to be the target compound operated by Hafiz Gul Bahadur, the leader of the Taliban. The strike included local tribes killed leaders.The, and aims to strengthen the local war effort, and added instead of the popular rejection of the drone attacks, and added to that feeling hostile to the United States in Pakistan. Kayani held a rare press conference, which condemned the attack drone (even persuade the Pakistani government called the U.S. ambassador to Pakistan, Cameron Munter, and “protest in the strongest possible terms”), described as “unbearable.” However, this was not satisfactory, most Pakistanis, who see that the mere disapproval and the American atrocities, provocation is not sufficient, and that instead of the concrete steps such as the withdrawal of cooperation in the war on terror need to be taken in order to save the interests of Pakistan.

His comments came Kayani on strike Datta Khel to be placed in a broader context of public communication and private by Pakistani officials with Washington, including the April 2011, the visit by the head of the ISI General Ahmed Shuja Pasha, to the Central Intelligence Agency Leon Panetta Director of Central Intelligence Agency headquarters. “[S] [was] OME officials in both countries, saying that intelligence relations [we] re reached their lowest levels since the attacks of September 11, 2001 paid, and the coalition,” according to one report. The report went on to say that communication in general and the special demands included that the CIA suspend drone strikes, as well as reducing the number of U.S. intelligence and special operations personnel in the country. After the meeting, ISI-CIA, said spokesman for the U.S. Central Intelligence Agency George Little on the intelligence relationship “remains on a solid foundation.”

He issued the order following a meeting with a 30-member delegation of the business community at the Corps Commanders Headquarters in Karachi. The delegation included presidents of the Karachi Chamber of Commerce, Federation of Pakistan Chambers of Commerce and Industry and heads of various industrial zones.

During the one and a half hour long meeting, the businessmen expressed their concerns regarding the law and order situation. They demanded a permanent role for rangers in policing, establishment of new rangers pickets at key locations in industrial zones and certain constitutional changes that would ensure speedy trials of criminals in the courts.

According to KCCI President Muhammad Saeed Shafiq, it was an important session for the business community “because it is only the army chief who can ensure that our concerns are addressed.”

Uncategorized 0 62 views
Pakistan is well known for its film industry, and the country is home to

Uncategorized 0 168 views
Talat Hussain is a Pakistani actor, writer and director known for his acting in

Uncategorized 0 338 views
Pakistani cinema was introduced to the world in 1947. There were only four films

Uncategorized 0 285 views
Bilal Lashari is a Pakistani film director and cinematographer. He born in August 4.

Uncategorized 0 347 views
Munir took up the art of acting as a child while still at school,

Uncategorized 0 206 views
What’s Shaan Shahid up to? The silver-haired, well-coiffed, famously multilingual actor is no stranger

Uncategorized 0 238 views
Badar Munir was a Pakistani film actor once known as Badar Abdul. Originally from
Profiles of Famous Pakistanis