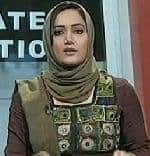 Aasma Sherazi is a Pakistani female journalist and an anchor working at SAMAA TV. Previously, she has worked on GEO News and later on ARY News.Late Edition with Asma Shirazi is a prime time talk show on Pakistan’s leading news channel ARY NEWS. Asma Shirazi was the only female anchor among top six tv anchors who were banned during Musharraf’s era.

She was born in Islamabad, and has a Postgraduate Degree in Political Science. She has experience as a news reporter and program anchor.
Asma started her career with GEO News in 2001. She later joined ARY News as an anchor and host of current affairs program

She is working on SAMAA TV as a host in a Talk Show, “Faisla Aap Ka”.