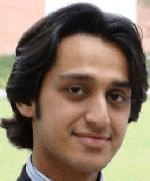 Shafaat Ali is a comic Pakistani actor who made his debut from the BNN a political satire show on Geo tv network.Shaffat is so talented guy that he has done parodies of much famous celebritieslike Atif Aslam,Monis Ilahi,Bilawal Bhutto,Imran Khan and Ahsan Iqbal.Shafaat and his fellow men Mubeen and Murtaza are doing great job in BNN(Banana news network).He is also script writer and model.

Syed Shafaat Ali  was born on 19 February 1986 in Peshawar Pakistan.