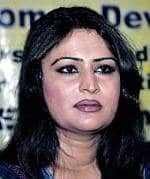 Member of the Provincial Assembly of Sindh from Mirpur Sakro

Sassui Palijo is a liberal politician and a columnist in Pakistan. She is Member of the Provincial Assembly of Sindh from Mirpur Sakro Thatta PS-85 THATTA-II, she belongs to Pakistan Peoples Party. She is the only directly elected female assembly member in Sindh. At present she is serving as Minister for Culture and Tourism in Sindh cabinet led by Syed Qaim Ali Shah.

Born in Jungshahi, Thatta a double Graduate, BA from University of Sindh and degree in International law from London Sassui has been an active campaigner for human rights and gender justice.

Father Sassui Palijo, and Ghulam Qadir Palijo, is twice and MPA are still active in politics.Her mother, Akhtar Baloch, was the first factor Sindhi female political to be arrested under the law of self-defense Ayoub during the student movement Sindhi in the age of 17, wasin jail for one year. Was found late Jiji Zarina Baloch known writer and political activist folk singer.
On June 02, 2012, Sassui Palejo has been removed from the Sindh Cabinet as minister for culture.

Uncategorized 0 149 views
Bilal Lashari is a Pakistani film director and cinematographer. He born in August 4.

Uncategorized 0 223 views
Munir took up the art of acting as a child while still at school,