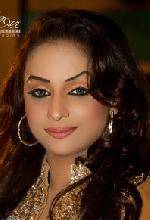 Nida chaudhry is a stage actress who is famous for her bold dance in theatre and stage.She was born in Lahore in 7 February 1985. She was banned for several times due to vulgar dance. Nida’s mother has died in her early age,she goes to her grave once in a week.