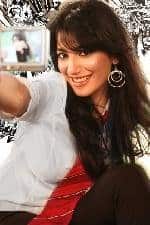 Naveen Waqar was born in Pakistan and studied from The City School. She first began her career as a VJ, RJ (Radio Jockey) and a singer, and later opted to become an actress and model too. She enjoys going to movies, painting and travelling. Waqar has a brother, Faraz Waqar Haider, who is also an accomplished singer and recently released his debut album “Andher” in which the two siblings collaborated on the track, “Intizaar”.

Naveen Waqar currently hosts the live music request show “Pick and Choose with Fuse” under the alias Fuse on the Pakistani music channel AAG TV. The program is noted for dealing with topics on day-to-day matters where people calling on the show offer their opinions, apart from placing requests to Fuse to play Pakistani songs. She is also the host of a Radio One FM91 music show “Morning Music Chuskah”. She has also played a role in the telefilm “Ab Set Hai”.

Naveen Waqar is an accomplished singer and writer. She enjoys going to movies, painting and travelling. Naveen Waqar has a brother, Faraz Waqar Haider. Who is also an accomplished singer. Naveen was a student of City School.Waqar started her career with the live music request show, “Pick and Choose with Fuse” (hosted on AAG TV), under the alias VJ Fuse. The program is also noted for dealing with topics on day-to-day matters where people calling to the show can offer their opinions.

As a Radio Jockey, Naveen also hosted the Radio One FM91 music show, “Morning Music Chaska”. When she chose to become an actress, she got a role in the telefilm, “Ab Set Hai”. Waqar’s current and most popular role is in the Hum TV drama serial, “Humsafar”. She portrays one of the main antagonists, Sara Ajmal, and works alongside Mahira Khan, Fawad Afzal Khan, and Atiqa Odho.

Navin a.k.a VJ Fuse is Pakistan’s hottest property as far as the Vj-ing and Rj-ing field goes. Famous for her live shows on AAG as a VJ and on Radio 1 FM 91 as an RJ, Navin has amassed a massive fan base under her belt in a very short span. A latest buzz about this gorgeous individual is her aspiration for music. Her anticipated debut album will be hitting the market real soon.

What do you do to relax?
Watch The Simpsons; go for a cup of coffee with friends.

You favourite food?
Anything and everything! Although I cannot resist biryani.

Favourite drink?
Cafe Mocha or anything with lemon in it.

In your DVD player?
Heroes Season 3

What do you do Sunday mornings?
Wake up late, have coffee in bed and don’t plan on going anywhere unless it’s at a gunpoint.

Which of your song is closest to you and why?
Waqt because that is how I believe life truly is.

Except for your own self who do you listen to?
A lot of people! I love all genres of music. From rock to jazz and from progressive house to tribal tech. I cannot do without John Mayer, Chris Cornell and Tori Amos. These days I am hooked to Ali Azmat’s new album. Its crazy wicked!

If you were not a singer/RJ/VJ, what would you be?
A writer for sure!

Funniest incident with a live caller?
When I had a musician guest over and the caller totally ignored him and kept on insisting he called to talk to me! One in particular called and said I should do one of the shows wearing a saari hahaha!

Most necessary thing for being an RJ/VJ?
Confidence! And the gift of the gab! Also being able to communicate it the most important thing.

Your worst nightmare?
Being lazy about my career and not being able to take it where I want to.

Phobias, if any?
I absolutely hate hospitals because of their smells. I cannot be there unless I’m severely sick. I cannot touch anything while I’m in there either because I feel everything is germ infected! Oh and I’m claustrophobic too.

Worst dressed VJ/Musician?
People might think I am worst dressed of them all because I don’t follow any fashion! But I honestly can’t think of anyone. Fashion is you owning the dress you wear, not the other way around. Simply dress to your personality.

What is love for you?
Total and complete honesty.

Most important possession?
It’s a tie between my car and my music.

First crush?
This guy from school who was two classes above me. I pretended to hate him so he wouldn’t know I had a crush on him.

Who is Navin?
She is a passionate go getter who dreams of travelling the world someday.

What is the best quality do you possess?
I’m ferociously loyal. If you make a friend out of me, then come rain and shine, I will be there no matter what.