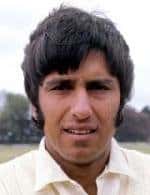 Majid Jahangir Khan is a former cricketer, a former captain of the Pakistan cricket team and one of the most fearless opening batsman produced by Pakistan. Khan’s first-class career spanned from 1961 to 1985. He played 63 Tests for Pakistan, scoring 3,931 runs and made 8 centuries, scored over 27,000 first-class runs and made 73 first-class centuries, with 128 fifties. Majid played his last test for Pakistan in January 1983 against India at Gaddafi Stadium, Lahore and his last One Day International (ODI) was in July 1982 against England at Old Trafford, Manchester
Early life

Born on 28 September 1946 in Ludhiana, in the state of Punjab in India, Khan grew up in Lahore, the capital of the Punjab in Pakistan. His father, Jahangir Khan, had played Test cricket for India before partition. Majid Khan started his career as a pace bowler, but an injury and doubts over his technique converted him into an off-spin bowler and batsman. He also played for the teams of Glamorgan and Cambridge University in England, for Queensland, Australia, and in Pakistan for Pakistan International Airlines, Rawalpindi and the province of Punjab. Majid Khan is the son of Dr. Jahangir Khan who famously killed a bird in flight while bowling during an MCC vs. Cambridge University match in 1936.This bird is now part of the permanent MCC museum exhibit at Lord’s Cricket ground. Dr. Jahangir Khan was the Chief Selector of Pakistan Cricket Board (then BCCP) when Majid Khan was close to National selection. Dr. Jahangir Khan resigned from his post to maintain impartiality of the Cricket board during selection of the national team .

Majid’s Test career started in 1964 against Australia at National Stadium, Karachi.Khan is one of only four batsmen (the other three are Trumper, Macartney and Bradman) to have scored a century before lunch in a test match, scoring 108 not-out off 112 balls against New Zealand in Karachi during the 1976–77 test series.Khan made his ODI debut against New Zealand in 1973 at Lancaster Park, New Zealand. He also holds the unique honour of scoring the first one day century for Pakistan, in an ODI against England at Trent Bridge on 31 August 1974. Khan scored 109 from 93 balls with 16 fours and a six.

Majid had played for Lahore since 1961/62 and had made his Test debut against Australia in 1964/65 and toured England with the 1967 Pakistanis. During a match with Glamorgan, Majid blasted a rapid 147 in 89 minutes, hitting Roger Davis for five sixes in one over. Wilf Wooller, the club secretary, had been a close friend of Majid’s father when Dr Jahangir Khan had been up at Cambridge, and the influential Glamorgan secretary persuaded Glamorgan county to sign him as the overseas player from 1968. In 1972 he won the Walter Lawrence Trophy for the season’s fastest century which he scored in 70 minutes for Glamorgan against Warwickshire. He captained the Welsh county between 1973 and 1976, scored over 9000 runs punctuated with 21 first-class centuries for them. Imran Khan,the legendary Pakistani ex-captain and fast bowler, and Javed Burki are his cousins.Bazid Khan,Majid’s son, has also played for Pakistan, making the family the second, after the Headleys, to have three consecutive generations of Test cricketers.

Initially, Majid Khan continued to boost Pakistan’s middle order, until he was promoted to fill the opener’s slot with Sadiq Mohammad in 1974. He was the first century scorer for Pakistan in One Day International Cricket, scoring 108 runs against England at Trent Bridge, Nottingham in the same season.Majid Khan was also a specialist slip fielder and made most catches look easy. Khan was also well known as a “walker”, maintaining the standards of the game in an era when professionalism was straining at the game’s traditional etiquette.

After retirement from International Cricket, Khan became an administrator with the Pakistan Cricket Board, becoming the CEO of the board in mid 1990s. He now lives in Islamabad.
All grace and fluency, Majid Khan played in the spirit of an English amateur of a bygone era. He had a distant air which sometimes gave the impression that he wasn’t really trying. Majid was a Cambridge Blue and he followed his father Jahangir Khan into Test cricket, though he never matched his father’s feat of hitting a sparrow in flight at Lord’s. He started his career as a pace bowler, but a back injury and doubts over the legitimacy of his bouncer turned him into an occasional offspinner. His batting prowess quickly moved him up the order, and he eventually formed one half of a highly successful opening partnership with Sadiq Mohammad. Majestic driving and hooking were his hallmarks, and he could score effortlessly at speed. His career ended on a sad note when his cousin Imran Khan was forced to drop him, which soured their relationship. He was a no-nonsense administrator, but he signed off by fanning match-fixing claims over the 1999 World Cup.