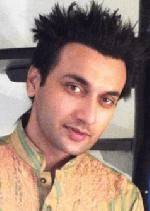 Faiq Khan is a Pakistani actor,model host and voice over.He has been associated with showbiz for last decade.He made his debut from PTV and later on he proved himself as a very good host model and actor as well.He worked as a voice over in drama serial Manahil aur Khalil on Express Entertainment.He dubbed the voice of character Mustafa in that drama.He performed acting in drama serial Laila,Libaas,Husna aur Husn Ara and Deewar.

Faiq Khan was born in 14th July 1981 in Karachi Pakistan.

Faiq Khan started his career from PTV and after thathe indulged himself in hosting,and modeling as well.He is also a very good voice over and actor.The dramas in which he performed a central role are;

Faiq Khan recently married and happily living with his wife.