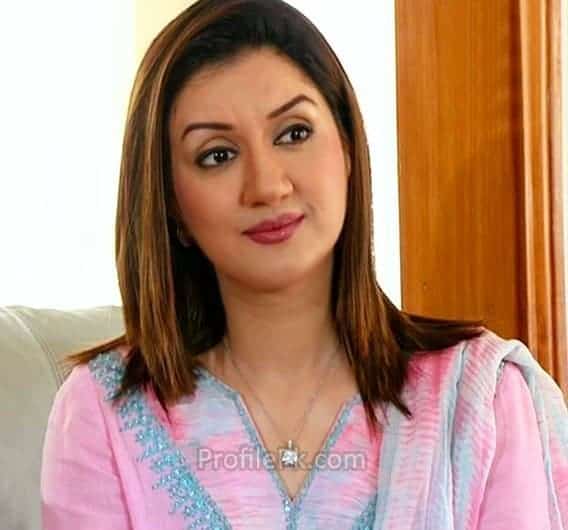 Ayesha Sana is a Pakistani actress who has appeared in film, television, and theatre performances. She graduated from Convent of Jesus and Mary in Delhi, India and attended Kinnaird College in Lahore, where she studied law.[1] She went on to get an external law degree at the University of London. Sana is a single mother and has one son, named Ahad.

She once hosted a television show called Lines of Style!. In 2006, she became the host, and member of the board of executives, for PTV’s Meena Bazaar. Currently she is hosting the most popular show ‘morning with Ayesha sana’ from PTV center Lahore. She does not like to be called aunty. she is also owner of diplex for men. She is 41 years of age 12th november 1968.

There is a very positive atmosphere with very progressive people working in PTV. It’s like a big family working together, not a bureaucracy,’ says Ayesha Sana

Ayesha Sana has large, expressive doe eyes that one instinctively knows can never lie; an asset that has no doubt helped her career as a television actress and one of the country’s busiest and most bankable models/comperes. But these same honest orbs have also caused the 34-year-old single mother (she has a 12-year-old son, Ahad, from her first marriage) heartache in her private life, as they reflect, as clichéd as it may sound, the hinterlands of her oftentimes tormented soul.

Ayesha used to host a show, entitled Lines of Style. Then, in 2006, Ayesha became the host as well as a member of the board of executives for Meena Bazaar on PTV. At present, she hosts the popular show by the name of Meena Bazaar on Ayesha Sana from the PTV Center in Lahore.

Ayesha is a very popular figure in the media industry, and even though her marriage didn’t pan out well, she hasn’t let it get in the way of her career. She has also hosted several events, including the Lux Style Awards for three years. Ayesha has also proposed plans to start her own designing house in a year or so.

The Sunday afternoon that we meet in Karachi, Ayesha hurries from a rented Radio Cab into the environs of a popular Zamzama café, and apologises profusely about being late. She is presently clad casually in a simple Ali Raza denim kurti and no make-up. “I’m an extremist,” she says about her laid-back appearance. “Either my face is unwashed or I am totally decked up.”

After ordering a vanilla cold coffee and a slice of carrot cake, she begins to explain how, during 2004 and much of 2005, she only co-starred opposite Deepak Perwani and Moammar Rana as the wily and obsessive Kiran in Misbah Khalid’s Mere Paas Paas. “I loved doing the play, especially as it was after a very long time,” she says.

The morning show for women with Ayesha as the host is a transmission with mass appeal, rather than for a niche market. “I speak a great deal of English on it,” she says. “I should speak more Urdu because I am speaking to the masses. Sometimes, if the script is too difficult, I try to find an alternative way to say it in my own words.” She says the programme’s basic impetus is to entertain. “It’s a two-hour vacation for women where they relax and are pampered and entertained. I totally connect with the public as I don’t only get phone calls but also e-mails, cards and letters from people from far-off places. There are women who have compiled registers of the recipes aired on the show.”

She says that one might imagine that the dusty corridors of PTV are mired by sticky red tape, but there is nothing further from the truth. “There is a very positive atmosphere with very progressive people working there. It’s like a big family working together, not a bureaucracy,” Ayesha says convincingly, her eyes wide open.

Apart from losing precious sleep time, hosting such a show has also meant that she had to give up her stint as the host of another TV magazine show, Lines of Style!

Although she has taken a hiatus from acting because of her PTV commitment, two of her plays will be on air simultaneously. “I shot Lagan about four years ago in 2002,” she says. The second serial which will air on June 30 is the Humayun Saeed production Makaan, directed by Kamran Qureshi in which Ayesha plays Bushra Ansari’s daughter. “I shot this play two years ago and was offered both lead female roles.”

Ayesha has, of course, acted in numerous plays and serials, her most notable ones being Girift, Shirazah, Pardah Na Uthao, Kaanch Ki Duniya and Badaltey Chehray among others. But it is her live hosting and compering where she interacts with appreciative audiences that energises her the most. “I love live hosting because it gives you instant gratification. Audiences either like you or hate you and I have been lucky in that sense. The criterion for me accepting such jobs is that the event, the people involved and the show producer have to have a credible track record.”

Some of her more prestigious events of late have included the Hope Show 2005, Bridal Waves 2006 and the PNCA show for Cherie Blair at the PM House in April 2006. She has also presented live transmissions for PTV as well as the Nafdec National Film Awards for three consecutive years.

Ayesha is also responsible for the brand promotion of the Lahore-based fashion house Details, which has shown at various prestigious locales thanks to her single-handed organisational skills. She says she acknowledges the encouragement extended by both the PNCA director Naeem Tahir and Asimyar Tiwana. She finds it curiously hilarious that some designers perceive she has become a designer herself. “I still wear Tazeen Hassan, Umar Sayeed and (her favourite) Rizwan Beyg.” Ayesha says she also admires HSY because “Sheroo has achieved success through hard work and brains.”

Ayesha says she is a survivor, and independent, but admits that it has a wide circle of friends and family. “I can not do anything without the network me. I know my family will always stand me, but other people who were always there for me was Rashid Khawaja, daughter photographer, my uncle the late Farouk time, Tina my cousin, and lamp Musarrat, who was a friend, a mother, a lifeline and a mentor.
“And I don’t believe in planning things anymore. When I used to do so, unbelievably strange things happened in my life.” One of these ‘weird’ and ‘wonderful’ occurrences was Ayesha falling in love as if struck by lightning. “I was 15 years old when I married the father of my son and had Ahad when I was 21. After divorce, I couldn’t imagine being with anyone else but then someone came into my life. When the feeling that you are in love with someone who is good looking and has a great personality goes wrong, it creates havoc. But I suppose I’m a romantic and always have to be in love.”

This most recent histoire d’ amour is more than complicated, and Ayesha says she cannot divulge much in order to protect the privacy of the object of her desire. “What is clear is that this man is inaccessible. This person may not even feel anything towards me. He is practical and he cannot shift the status quo. You never think you can be in love with a person and not be able to meet or talk to that person; it hurts. I’m usually very positive and this whole experience has made me realise that I am capable of giving unconditional love and that I can now settle for less.

“There was a time when I could never take second place to anyone or anything. But now the magic of this person makes me able to just love him from a distance and not even have him reciprocate. It’s like an enchanted spell. I have always believed that what needs to happen happens for the best, so I can only hope.”

But always optimistic with Line 1 and supported by my innate spirituality deeply rooted fatalism, and Aisha soldiers bravely on, whatever the circumstances. A recent example of this persistent and unexpected death of her uncle and mentor, Farouk Zaman, who passed away peacefully in his sleep. “He was like a father to me,” she says. For three hours of the morning after his death, and says it was a struggle to get up and face her live audience. “I had made ​​a commitment and it was a classic case with all my heart to be in one place and mind being somewhere else. I did not have time to grieve and I realized how I was helpless. But it was a chance to meditate and not retroactively about how much of our lives is our own, “says Ayesha Sana.