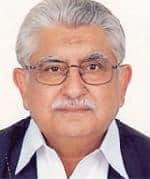 A Hindko speaker, he is from a family of anti-imperialists, the son of Hakeem Abdul Jalil (Hakeem Sahib was actively involved in the non violence movement, Khudai Khidmatgar against the British Empire in the subcontinent and was the president of All India National Congress Committee Peshawar District and a close colleague of Bacha Khan and Mahatama Gandhi and Member of Central working committee of Congress.

During his political career he served as finance minister and deputy speaker in the provincial government of Khyber-Pakhtunkhwa. He is senator and represents Khyber Pakhtunkhwa in the National Finance Commission of Pakistan.

He had two sons : Mohammad Adnan Jalil and Jibran Adeel.

Jibran Adeel died at a very young age of a heart attack.
Role in Senate

Haji Adeel is a die hard believer of Pakistan and India friendship. He has been very active in campaign and leads the caucus of parliamentarians for New South Asia.