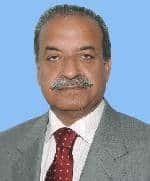 Sardar Mehtab Ahmed Khan Abbasi (born 15 December 1952 in Malkot, Abbottabad District to a Hindko speaking family of Hazara) is a Pakistani politician and former Chief Minister of NWFP from 1997 to 1999 and Federal Minister for Railways in the 2008 PM Yousaf Raza Gillani cabinet. He is politically affiliated with PML-N, where he is the Senior Vice President. He has served as a senator from March 2003, but resigned on March 17, 2008, when he won the NA-17 Abbottabad-I National Assembly seat in the 2008 general election, held on February 18, 2008.
His uncle Sardar Sarfaraz Khan tipped Sardar Mehtab as politician and he was elected Member of the Provincial assembly first time in 1986.

Mehtab Khan won all elections except in 2002, though it could not block his way to the Parliament as he was elected Member of the Senate in 2003.He became 22nd Chief Minister of the North West Frontier Province (NWFP) on February 21, 1997 and served in the office till October 12, 1999.
He also held offices of provincial minister health, law and parliamentary affairs while served as federal minister for Kashmir affairs and Northern areas.Sardar Mehtab had been member of Senate Standing Committees on port
Education and Early life

Mehtab Ahmed Khan Abbasi passed matriculation from Govt High School Murree and graduated from the Sir Syed School in Rawalpindi. He then went on to do his LLB and practiced in the courts of Rawalpindi. Finding the legal profession not to his liking, he joined his father Sardar Muhammad Nawaz Khan’s clothing business in Rawalpindi Saddar. His uncle Sardar Sarfaraz Khan had contested local elections but never won and so promoted his nephew Sardar Mehtab in Circle Bakote, who was elected for the first time in 1985 as an independent candidate. He became popular among the people of Circle Bakote and has been successful in every election until now.
Chief minister

Mehtab Ahmed Khan became the 22nd chief minister of the North-West Frontier Province on the 21 February 1997, taking over from Raja Sikander Zaman, and served until 12 October 1999. During his tenure he invested heavily in area of Circle Bakote, a relatively poor and underdeveloped area. During this time, he electrified all of the area, provided facilities such as telephone lines, water supply schemes, link roads, like the Kohala – Moolia road, Sowargali – Boi road, Birote – Berote Khurd, and the Osia – Malkot road. He constructed the Murree – Abbottabad road as a motorway and upgraded high schools in Ayubia, Birote and Bakote.
Military coup and jail

Sardar Mehtab’s term was cut short by the military coup of 12 October 1999 and he was arrested from his house in Abbottabad. He was involved in the wheat scandal case in Attock Fort. However, he was later released after arguments of his lawyer and the High Court found him not guilty. He remained in Attock Fort jail for three years.

He then became a senator in March 2003. He opposed the award of ticket to Sardas Idrees Khan of Karhal Tribe of Galiyat as a candidate of PML (N) to the Ex-Prime Minister of Pakistan, Mian Nawaz Sharif in 2002 general elections, but he won the election as MPA of NWFP Assembly, and joined the Muttahida Majlis-e-Amal (MMA), and was appointed as Provincial
Minister of the Local Bodies Ministry.

The first ever case against the military regime of General Pervez Musharraf was filed by his lawyer Mr. Mian Muhibullah Kakakhel Senior Advocate, Supreme Court of Pakistan in the case of Sardar Mehtab Ahmad Khan Abbasi Versus National Accountability Bureau and other high Military hierarchy. The petition was numbered as writ petition No. 1 of 2000.
Post-CM political career

Mehtab Ahmed Khan did not contest the general elections in 2002 for National Assembly, and therefore had to settle as a Senator in the March 2003 – March 2009 tenure. In the 2008 general elections, Mehtab Ahmed Khan won NA-17 Abbottabad seat , and hence vacated the Senate seat. He also won the PF-45 provincial assembly seat, which he will have to vacate as parliamentarian can only keep one seat. His son Shamoon yar Khan won this seat.