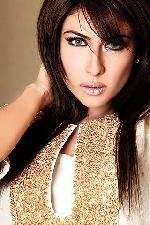 Meesha Shafi born on 1st December 1981. She is a daughter of  famous Pakistani actress Saba Pervaiz and Syed Pervaiz Shafi. Later on Saba divorced from Shafi and she married to actor Waseem abbas ; so Meesha is step daughter of Waseem abbas. Meesha’s brother Faris Shafi and also appearing in different drama serials on different tv channels.

Shafi is married to a guitarist and the former band member of  Overload Mehmood Rehman in an Islamic wedding ceremony  in Karachi In 2011, she gave birth to a baby girl name Janevi  whoes meaning is Ghar Ki Jaan or Darling of the Home.

Meesha’s step in in the industry was at the age of 17 when she starred opposite Jawad Ahmad in the video Bin Teray Kya Hai Jeena which was nationally adored. She started her modelling career soon after. In 2011, female model Meesha Shafi became the brand spokesperson of L’Oreal. She has featured in many Pakistani magazines and international publications as high brow as L’officiel. She has also appeared in commercials for coca cola, Fanta, LG mobile phones, Mobilink, Allied Bank, lipton tea  and more.

Shafi and her husband Mahmood Rahman  was the member of Overload but due to some reason they left from the band. She became an overnight success with the runaway success of her collaboration with Arif Lohar  on Coke studio  with the song  Alif Allah Jugni . The single with Lohar gathered over 11+ million views on you tube , the most-viewed  Coke studio song yet. She also sang a unique rendition of the classic folk song “Chori Chori”, which also was viewed extensively on YouTube and received more critical acclaim than jugni . She returned to coke studio  in 2012 in which she sang “Ishq Aap Bhi Awalla” with the Chakwalees, and sang a ghazal by Faiz Ahmad Faiz, “Dasht-e-Tanhai”. She has also contributed to the soundtrack of  The Reluctant Fundamenyalist in a track produced by her husband, musician Mahmood Rahman.