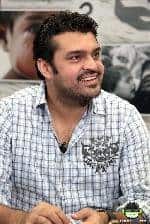 Fakhar e Alam born in January 19 1972 in Lahore Pakistan.He is a Pakistani actor VJ and singer popular for introducing the pop/bhangra genre of music in Pakistan. He is the grandson of Akleem Akhtar popular mistress of Pakistans second Military dictator Yahya Khan. She is also known as General Rani meaning Generals Queen in English. Though he is still considered a pioneer of pop/bhangra music culture in Pakistan now he is trying to gain ground by hosting TV shows and appearing in military/governmental sponsored music shows.
Early career

Alam burst into the scene in 1993 by launching the super hit single Bhangra Pao and establishing himself as the king of pop/bhangra/rap music in Pakistan. The single then made way as the first Pakistani video to be shown on MTV. Though not isolating himself from music he simultaneously began to host the music show Music Channel Charts interestingly the same program which launched Alams debut single.
First Pakistani video on MTV

The single then made way as the first Pakistani video to be shown on MTV. Though not isolating himself from music, he simultaneously began to host the music show “Music Channel Charts”, interestingly the same program which launched Alam’s debut single.

He later switched to acting and hosting TV shows.He has more than 4000 TV shows under his belt as an anchor and a host. He was known for his high energy performances on stage, though he never performed after the 2005 earthquake.

Fakhr Alam was also flown to USA by CNN for a worldwide LIVE interview about the earthquake which was telecast LIVE from the CNN headquarters. Alam was the only Pakistani to be given this honor. No representative of the government or any other established NGO was given the opportunity.

Following his first album and VJing stint he jointly performed Pyar diyaan Gallaan with the bands Fringe Benefits and Arid Zone. Though his patriotic single Proud Pakistani with Nadeem Jaffery was notable Alams later albums did not make any ground in the Pakistani music scence. He later switched to acting and hosting TV shows. Fakhar also starred in a Lollywood movie Very Good Dunya Very bad Log as a hero along with film star Nirma the movie did not meet much success. After his continuous failure in music and acting he virtually ended his musical career nevertheless continuing his hosting career.

For GEO Television Fakhar e Alam successfully hosted the show Bolain Kya Baat Hai (English Tell us what the matter is) telecast on GEO Super in which he interviewed various sports personalities and discussed cricket and other sports related events. The show and its host proved to be very popular with the audiences. Though he no more hosts the show Fakhar provides background voice for the channels promos.

Fakhr-e-Alam’s on stage performances have made him one of the most sought after Asian performer on the live circuit. He has performed hundreds of concerts locally and around the globe. He did his first tour in 1996 when he went to U.K and had the opportunity to perform at the world famous Wembley Arena London and the Nynex arena Manchester. After a tremendously successful tour of U.K followed a U.S tour in 1997. His successful tours of U.K and U.S.A compelled him to undertake world tours. Thousands of Asians settled around the world felt the power and energy of Falam’s electrifying performances. Earning him a bigger fan base, not only in Asia but also U.K, U.S.A, Middle East and other continents.
Falam’s muzik and the message that he delivers with it compel him forward. With more tours lined up, the artist shows no signs of taking a break in the near future. His work spanning nearly 8 years now and embracing not only Rap, Bhangra but also Rock Reggae and some very interesting fusions. He has branded his new flavor of muzik as Ethnic hip hop.
Hit Songs