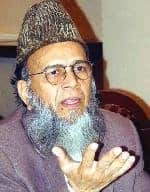 Syed Munawar Hassan is from a distinguished family, based at Delhi before the independence of Pakistan. He was born in August 1944 and as his family opted for Pakistan, migrated to Karachi in 1947. He obtained a Master’s in Sociology (1963) and in Islamic Studies (1966) from the University of Karachi.
History

Syed Munawar Hassan joined the National Students Federation (NSF) – a student body with a communist ideology- and was elected its President in 1959. The real change appeared in his life when he got a chance to come closer to the activists of Islami Jamiat-e-Talaba (IJT) Pakistan and studied the writings of Mawlana Syed Abul Ala Maududi. As a result, he joined IJT in 1960, became its member and soon he was elected as President of its University of Karachi Unit, Karachi City Unit and member of the Central Executive Council. Later, he reached its top slot and became all-Pakistan President in 1964 and served in that capacity for three consecutive terms. During his tenure of the President, the Jamiat organized several campaigns mobilizing public opinion regarding education problems, system of education, women education etc. etc.

He joined the Islamic Research Academy (IRAK) and later Islamic Jerusalem Studies, at Karachi as a Research Assistant in 1963 and raised to its Secretary Generalship in 1969. Under his supervision, the Academy published 70 scholarly books. He also rendered services as Managing Editor of the Monthly The Criterion and The Universal Message, Karachi.

Syed Munawar Hasan became a member of Jama’at-e-Islami Pakistan in 1967. He served the Karachi unit as Assistant Secretary, Secretary, Deputy Ameer and Ameer of the city. He was also elected to the Central Shura and the Executive Council of the Jama’at. He represented Jama’at at several platforms, including United Democratic Front (UDF) and the Pakistan National Alliance (PNA). Contesting National Assembly election in 1977, he secured the highest votes in Pakistan. He was Assistant Secretary General of Jama’at-e-Islami Pakistan in 1992-93, and became Secretary General in 1993.

He took part in a number of international conferences and seminars and has visited USA, UK, Canada, Central Asia, Middle East, North Africa and many countries of the Southeast Asia.

Syed Munawar Hasan is well versed in English. Many of his speeches, mostly in Urdu, are also available in cassette form. He heads a number of planning and research bodies within the Jamaat.